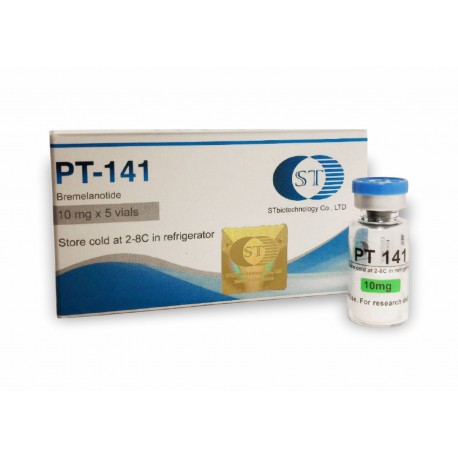 Found a lower price? Contact us and we give you a better deal!

PT-141 (Bremelanotide) is a popular peptide, its main purpose is increasing the libido. The main feature of this preparation is the possibility of its use both by men and women. PT-141 is absolutely safe, although it is of synthetic origin. The solution administration may be assigned for men at the erectile dysfunction and for women in case of sexual disorder.

Different studies and researches discovered other properties of the preparation. The peptide PT-141 is able to stimulate the production of melanin causing a strong tanning effect. So the laboratory tests of the peptide constantly expand its application areas.

PT-141 is used both by men and women. The main difference between Bremelanotide and such drugs as Viagra and Cialis is that its active substances affect the libido not only blood vessels.

Please carefully read the instructions to the PT-141 in order to achieve the desired result at the right time.

Application and dosage of PT-141

To achieve first results it is enough to administrate 0.3 milligrams of the preparation subcutaneously. It is the initial dose allowing to define the effect of the active components on the organism. Further the dosage can be increased if necessary. The optimal dosage for one administration is between 0.5 and 1.5 milligrams.

The first signs of the effectiveness of Bremelanotide appear in a couple of hours after administration. The maximum effect is reached after 3-4 hours. Totally the active substance's effect lasts for 8-10 hours.

Side effects and contraindications

As a part of the study it was found that Bremelanotide has all the features stated in the instructions and perfectly performs its purpose. At the same time some test persons had an increase of blood pressure so the study of the preparation was stopped. Reviews of PT-141 also show that overdosing could negatively affect the level of blood pressure and cause hypertension. Also it should be noted about the possibility of local reactions such as redness of the place of injection. This symptom usually disappears in few minutes and is not considered as complication.

Application information is posted for the informational purposes only.

Found a lower price? Contact us and we give you a better deal!