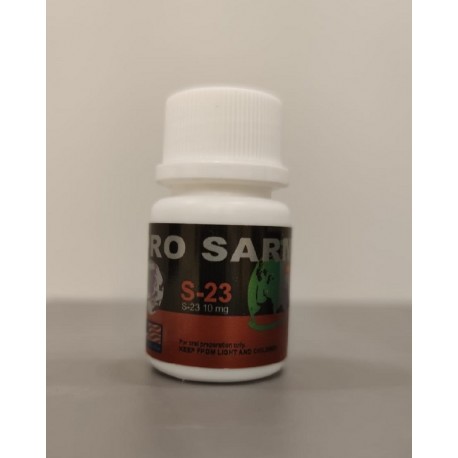 S23 is one of the strongest SARMs available in the bodybuilding community. SARMs are selective androgen receptor molecules and they work by targeting specific androgens in bone, joint, and muscle tissue.

Because of these ‘strong bonds’ you can expect to experience the following benefits:

To encourage mating in rats, they were given S23 alongside estrogen (which can cause muscle loss). S23 was able to override the effects of estrogen, instead helping the rats involved to increase their lean muscle mass and strength.

Users have also reported being able to better retain their gains at the end of their cycle due to using S23.

Users have reported significant boosts to their physical endurance, speed and stamina after incorporating S23 into their cycle. As a result, they were able to work out harder and for longer.

During a study on rats, S23 SARM helped to decrease their average body weight and fat mass, whilst increasing their bone mineral density and muscle size. This study also showed that high dosages of S23 can increase fat burning and fat oxidation, leading to massive drops in body fat. Therefore, it stands to reason the more S23 you take, the greater your fat loss will be.