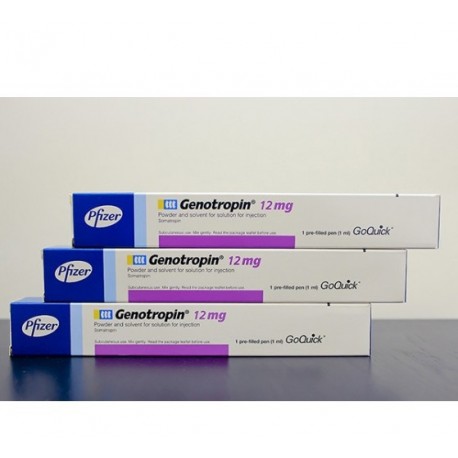 Human Growth hormone (HGH) Genotropin Pfizer, also known as somatotropin or somatropin, is a peptide hormone that stimulates growth, cell reproduction and regeneration in humans and other animals. It is a type of mitogen which is specific only to certain kinds of cells. Growth hormone is a 191-amino acid, single-chain polypeptide that is synthesized, stored, and secreted by somatotropic cells within the lateral wings of the anterior pituitary gland. Many factors influence the release of Human Growth Hormone, however, including nutrition and exercise.

Human Growth Hormone Genotropin Pfizer stimulates the body cells to increase both in size, as well as undergo more rapid cell division than usual. In addition, it enhances the movement of amino acids through cell membranes and also increases the rate at which these cells convert these molecules into proteins. Clearly, you can see that this would amount to an anabolic (muscle building) effect in the human body. Human Growth Hormone also has the ability to cause cells to decrease the normal rate at which they utilize carbohydrates, and simultaneously increase the rate at which they use fats. Fat loss and lean mass increases with Human Growth Hormone have been found at a dose as low as 0.028 iu/kg/daily for 24 weeks. It also stimulates production of IGF-1.

HGH Genotropin Pfizer is used in medicine to treat children's growth disorders and adult growth hormone deficiency. Studies reliably demonstrate that the following are among the beneficial effects of modulating HGH:

·         Promotes gluconeogenesis in the liver

·         Contributes to the maintenance and function of pancreatic islets

Also several studies, primarily involving patients with HGH Genotropin Pfizer deficiency, have suggested a crucial role of HGH in both mental and emotional well-being and maintaining a high energy level. Adults with HGH deficiency often have higher rates of depression than those without.

HGH has also been studied in the context of cognitive function, including learning and memory. HGH in humans appears to induce cognitive function and may be useful in the treatment of patients with cognitive impairment that is a result of HGH deficiency

In its role as an anabolic agent, HGH Genotropin Pfizer has been abused by competitors in sports at least since 1982. HGH can easily produce very nice, high quality weight and muscle gains, it’s a very poor compound for inducing strength gains. Competitors of the '70s, and especially the '80s began to present a more refined look with chiseled muscle development reminiscent of Classical Sculpture and resembling deeply etched rock. Those guys, one could reasonably postulate, were not adding additional cardio to their programs and eating more lean proteins.

HGH Genotropin Pfizer shows much more effect and positive qualities in stack with a steroid cycle as alone. So, this compound is generally suitable for cutting cycles to get lean muscles and burn fat.